The Fiction tool (Androutsopoulou, 2001, 2015) is designed to facilitate the narration of personal stories in a safe emotional environment, and is based on an understanding of the self as multi-part and polyphonic. The instructions ask for the written summary of a favourite fiction story, selection of three heroes, their feelings and their life development. Previous research has shown that, in adults, the main hero reflects the future projection of the more dominant part of self with other heroes reflecting less dominant parts, sometimes silenced by trauma and not voiced in ordinary therapy talk. In the present qualitative study, we investigated the usefulness of the Fiction Tool in helping adolescents voice sensitive issues regarding emotional security. Researchers were third year trainees in enriched systemic psychotherapy and worked with a team-based method to case studies. Twelve adolescents participating in a school-based group for self-development/counselling were given instructions for the Fiction Tool. They were also asked to write an early family recollection and draw a “bird’s nest” (BND) (a projective attachment tool). The school counsellor’s notes were used for comparison purposes. Common narrative themes were marked horizontally and vertically by isolating identical or synonymous words/phrases. Fictions and early memories were evaluated as indicating security when parental figures (or other adults in fiction) were present and perceived either as helpful in anxiety-provoking situations or as non-threatening/pleasant in non-anxiety-provoking situations. The BND was evaluated as secure when eggs/young birds and feeding bird were all present, and there was a positive description of the nest (positive phrase or 3 positive adjectives). Other secondary features (e.g. color) were examined. High concordance between 3 tools was found in the majority of cases (8 out of 12). Wherever the main hero selected by the teenager had a positive projection to the future (Fiction tool), the common theme, identified vertically, was eventually hopeful, irrespective of the teenager’s negative beginning depicted in the BND and/or the early memory. Wherever the main hero selected by the teenager has a negative projection to the future, the main theme was regretful, and in line with the teenager’s negative beginning as depicted in both the BND and the early memory. The Fiction tool appears useful for working in counselling/therapy as it can be a safe way to talk about sensitive family issues regarding security. The heroes selected illustrate parts of self, internal and external positions or voices. In counselling, hopeful/more secure parts of the self (different heroes) can be strengthened or helped introduced if lacking. Further studies are needed to establish these findings and deal with the drawbacks of qualitative case studies.

·       Counsellor notes: Anna’s parents are divorced something that still hurts Anna, even though the family has good communication. Anna is a giving and pleasant young person, who expresses her feelings.

In all three tools, there is a sense of security, trust in resources and a positive future expectation. All the bird family is present in a nest “on tallest tree in prominent position”. In the memory, the parental figures are present and helpful: Announcement of divorce, planned perfectly as family game of different paths, ends in hugs.  Anna feels a variety of emotions. In fiction (“Whiplash”), the life of the main hero (young jazz drummer) has a positive life projection (feels pressure, but seeks perfection). Helping adult figure present (teacher), but strict. Parents not mentioned.

·       Voice to be heard: There seems to be a general agreement between the school counsellor’s impression and the analysis of the tools. However, (family) concern with perfection that may come at a cost would need to be addressed. 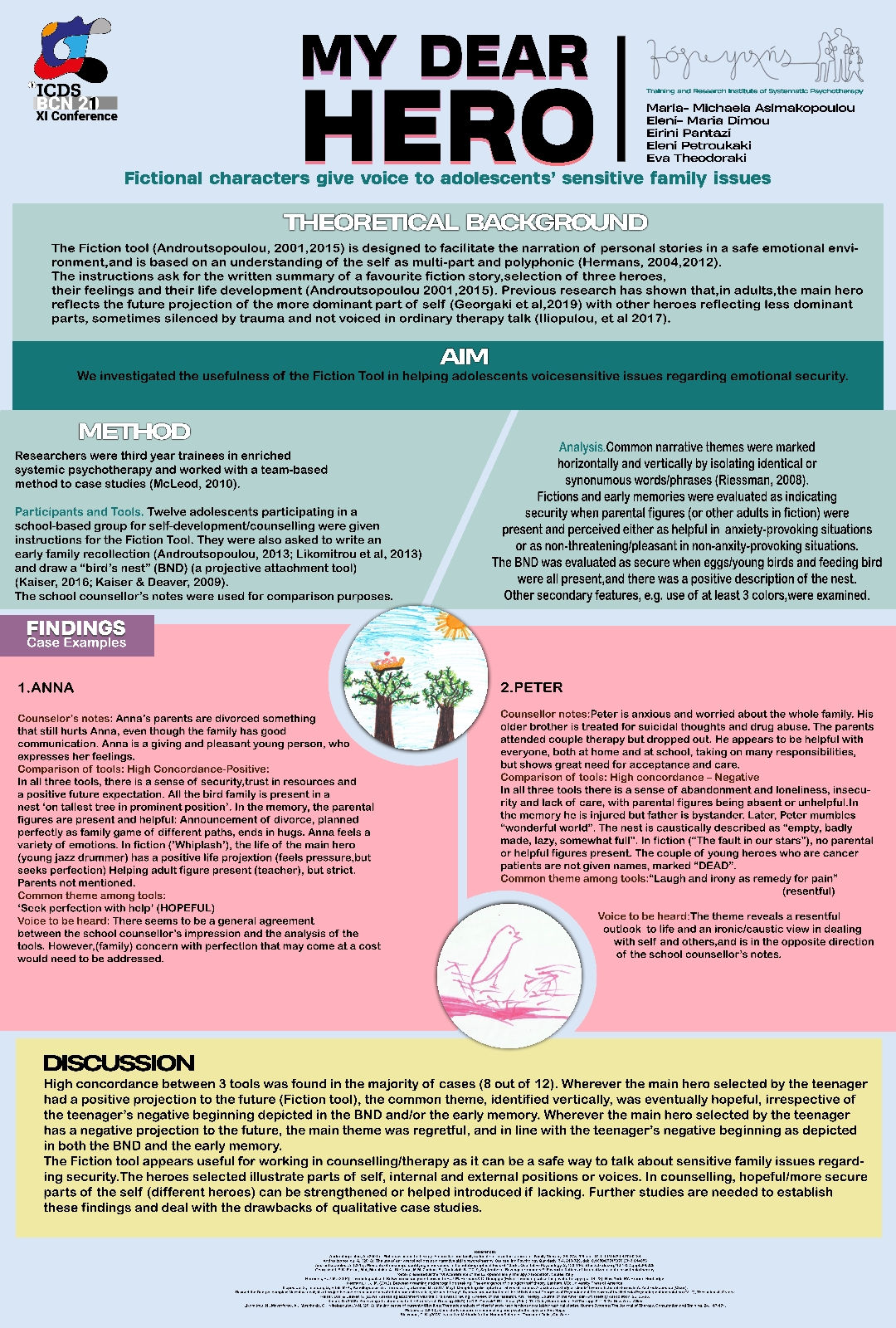